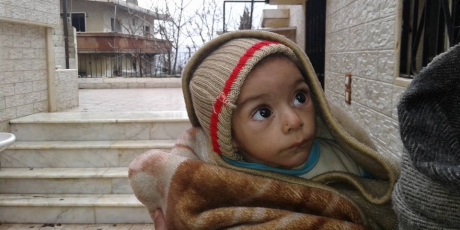 In the besieged town of Madaya, starving children are eating tree leaves, cats and insects. The Assad regime is literally starving over 40,000 people to death. It’s hard to imagine the suffering of parents watching their kids die from hunger — but we have a way to help them.

A truce to lift the siege on Madaya and other cities was brokered in September, but civilians are still trapped inside without food and medicine. Turkey and Iran can work with their allies to ensure the siege is lifted, but won’t act on their own. If we raise a one million strong outcry calling on UN Secretary General Ban Ki-moon to intervene and work with all sides, we could save thousands of families from starving to death in Madaya.

Ban Ki-moon can do this — if the siege is lifted, it could set a hopeful foundation for upcoming peace talks. And with his service to the UN ending soon, lifting the siege would be a great achievement for his legacy. With enough pressure from each one of us, we can get Ban Ki-moon to be the champion Madaya desperately needs right now.

Add your voice to the urgent petition. Avaaz will take stories and photos from Madaya to the media, the UN, and key foreign ministries until the siege is lifted:

After mounting media pressure, the regime just announced that it will finally allow some aid into Madaya. But then what? Aid was distributed in October as well, though most of it was expired, and it quickly ran out. To really save the people of Madaya, we need the siege to be lifted entirely.

Already 31 people have died from starvation this month. Residents risk being blown to pieces if they try to escape because the town is encircled with landmines. On Sunday a pregnant woman and her daughter tried to escape, and accidentally triggered one. They survived, but the blast gave their location away to militants. There is no escape for the people of Madaya — only lifting the siege can save these desperate families.

The regime is using barbaric tactics to punish and intimidate anyone who opposes their control. Citizens from Madaya were active during the 2011 protests. Now they are paying the price for daring to speak out years ago. Many parties in this conflict are guilty of blockading towns, but the regime is responsible for the vast majority, and regularly airlifts food to its supporters, while Madaya’s residents waste away. Our call for lifting the sieges would help civilians in rebel and regime-held areas.

We won’t be able to end the Syrian conflict by saving Madaya, but all the pieces needed to lift this siege are at our fingertips. We could help save thousands of innocent Syrians who deserve a chance at life — we can’t give up on them now.

The UN was made exactly for moments like this. Let’s end this nightmare in Madaya and show Ban Ki-moon that we won’t give up until all sides commit to freedom of movement for civilians, food and supplies. Sign the urgent petition and tell everyone:

Sometimes it feels like this war is never ending, but time and again our community has come together and stood with the Syrian people. We’ve done it since day 1, and we won’t give up. Now let’s do it for the families of Madaya who need us to fight for their lives now more than ever.

‘Children are eating leaves off the trees’: The nightmare of the siege of Madaya, Syria (Vice News)
https://news.vice.com/article/children-are-eating-leaves-off-the-trees-the-nightmare-of-the-siege-of…

Up to 40,000 civilians are starving in besieged Madaya (The Independent)
http://www.independent.co.uk/news/world/middle-east/war-in-syria-up-to-40000-civilians-are-starving-…