Migrants in Calais Desperately Rush the Channel Tunnel to England, Night After Night 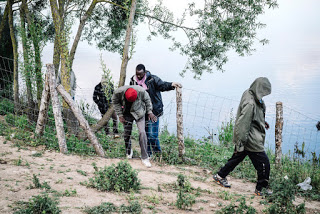 (dal New York Times)
The
sun had barely set when a 23-year-old Eritrean woman who gave her
name as Akbrat fell into step with dozens of other men and women and
started scaling the fence surrounding the entrance to the French
side of the Channel Tunnel.

The barbed wire cut her hands, but
she did not feel the pain. The police seemed to be everywhere. She
thought of her 5-year-old son back in Africa and ran, zigzag through
the falling shadows, once almost colliding with an officer in a
helmet.

Then she was alone. She slipped
under the freight train and waited, clambering out just as it began
moving.

But
before she could hurl herself onto the train bed transporting trucks
filled with Britain-bound
produce, a French officer caught up with her, she recalled in an
interview on Thursday. Blinded by tear gas, she stumbled and bruised
her right ankle. After being ejected from the complex around the
tunnel, it took her five hours to limp the nine miles back to the
refugee camp of makeshift shelters that its 3,000 inhabitants call
the “jungle.”

“You’re
lucky you weren’t killed,” someone told her.

The desperate scene playing out
each night and day in Calais, with migrants trying to vault fences
or cut their way through them and climb onto trains or into trucks
going
across the Channel to England,
is just one chapter in a painful drama playing out across Europe.

For many of the migrants who have
been coming to the Continent from Africa, the Middle East and
beyond, Calais, a mere 21 miles from the white cliffs of Dover, is
their last stop. If they make it across to Britain, many believe
they will have reached safety and a better life. Some are attracted
to Britain because they speak some English, others because they see
better job prospects there than on the Continent. A few even cite a
strong pound.

Those who make it as far as this
port city often express striking and implacable certainty about
their right to go the rest of the way, having come so far.

Nursing
her sprained ankle outside the tent she shares with a dozen of other
men and women, Akbrat lamented the fact that she would have to rest
for a few days before making another attempt. “I’ve crossed the
sea and walked for many months,” she said. “I am not giving up
now.”

Like
others here, she declined to give her full name or have her
photograph taken for fear of jeopardizing her chances of slipping
across the border undetected.

Akbrat arrived in Calais five days
ago. But she has spent much of her life as a refugee. When she was
13, her father was killed, a political assassination in Eritrea, she
said. Her mother fled with her and her two sisters to Sudan. When
her mother died seven months ago, Akbrat left her son with her aunt
and began her own journey to Turkey and then across the
Mediterranean to Greece. She hopes to bring her boy to Britain once
she has papers and has found work, she said.

“I
thought I would die on that boat,” she said. “Until I die, I
will try to go to England.”

Like
Akbrat, many migrants here try every night, sometimes several times,
undeterred by injury or the deaths of others. They set off late in
the afternoon, walking three or four hours to the freight train
terminal. There they await sunset, sometimes around campfires,
before hauling themselves over the fences in large groups in the
hope that some will slip through police lines.

Ten migrants have died over the
past six weeks, said Chloé Lorieux, a nursing student who
volunteers for the charity Médecins du Monde and helps at a clinic
in the camp. This month, she said, a woman lost her baby after her
water broke prematurely when she tried to climb onto a train. Many
here have multiple scars from barbed wire or police batons and, in
the worst cases, multiple broken bones from being hit by a departing
train.

But
every night a few make it. How many, no one can say; estimates range
from a handful to 40 people. That is what keeps them going, said
Mima, 26, a university graduate from Ethiopia, who began his journey
in June last year, fleeing a jail sentence as a member of an
opposition party. He paid traffickers — brokers, he calls them —
$5,000 his mother had saved up for him to make it across Sudan,
Libya and the Mediterranean to Italy. Half of the 243 people on the
rickety boat died during the crossing to Europe, he said.

“The U.K. is not paradise, it’s
not heaven, I know that,” he said. “I know it’s not safe to
jump on a moving train. But we have no choice. If you had a choice,
why would you do this?”

A Syrian man, Yusuf, 40 said he
had much the same feeling. He came from Dara’a, and said he was a
lawyer who supported the democratic movement and was forced to flee.

“We come here because this is
the only road to England,” he said. “Every day we go to the
train. Whenever we try, we are pushed back by the police. They come
at us with their dogs, their tear gas, but we go every night.”

He
has not told his family the conditions he is living in, he said —
unwashed and exhausted and with hardly any money left because he has
paid most of it to smugglers. “Many Syrians are cultivated, we are
educated, we want to go to an educated place, and I can already
speak a little English,” he said.

When
there are troubles in Afghanistan, as there are now with the
Taliban’s return to several areas, the numbers of Afghans in the
sprawling refugee camp in the Calais dunes rise. Syrian refugees are
there in large numbers, and there are some Iraqis. Sudanese have
come, as well as Somalis. A couple of years ago there were more
people from Burundi and Rwanda, aid workers said.

Set on the edge of Calais in a
dusty patch of land with no trees for shade, the refugee camp
resembles camps throughout the underdeveloped world, or worse. It has
just 30 toilets for 3,000 migrants; international humanitarian
standards would dictate one for every group of 20, Ms. Lorieux said.

For
a long time, there was not even any water, but now spigots have been
set up in several sections of the camp. Jean-François Corty of
Médecins du Monde calls it a “tolerated slum.”