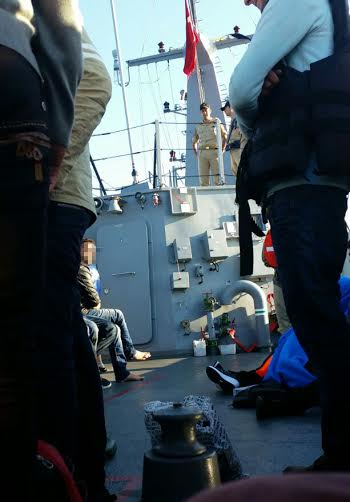 The consequence of the EU-Turkey Deal: WatchTheMed Alarm Phone documents
illegal push-back operation in the Aegean with Frontex present:

“The Turkey-deal is that inhumane: This was a brutal and illegal
push-back operation by the Greek Coastguards, and Frontex watched” –
this is how Hagen Kopp of the WatchTheMed Alarm Phone summarized the
incident that took place in the early hours of the 11th of June, near
the Greek island of Chios.

The hotline project to support boat-refugees reconstructed the events
through direct exchanges with those affected. GPS-data proves the
journey and the position of the boat on the Greek side of the maritime
border. Photos that were secretly taken with mobile phones document this
unlawful push-back. 53 refugees, including 14 children had left from
Cesme/Turkey on a rubber dinghy and moved toward Chios.

Within Greek territorial waters they were stopped by a vessel of the
Greek Coastguards. Those seeking protection, among them refugees from
Syria, Iraq and Eritrea, were then forced at gunpoint to transfer onto a
boat of the Turkish Coastguards and were then returned to the Turkish
coast. “This whole incident occurred in the presence of two Frontex
vessels and demonstrates once more the direct involvement of the
European border agency in grave and inhuman practices”, said Hagen Kopp.
WatchTheMed Alarm Phone calls on those politically responsible to cease
these inhuman practices immediately.

– A report on the case can be found here:
http://watchthemed.net/reports/view/521